Antoni Stojak is not a Pleb!

After years of blogging and forum posts about my zeal for Kettlebell Sport, I found myself enjoying reading others' diatribes, facebook posts, and comments.   Well, Dammit! Antoni Stojak did it.  The crazy Australian son of a bitch brought me out of my blogging hiatus! 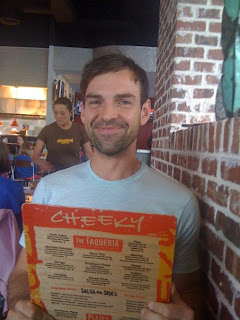 Where did it all begin?

I had the pleasure and honor of coaching Australia's best female lifter Emily Friedel from 2009-2011.   Emily came to the USA in November of 2009 to compete in the WKC Vegas Classic  and attend the WKC Coaching certification in Cincinnati.  On that visit, she told me of a very enthusiastic new lifter named Antoni.  She said she had been helping him, but that she was directing him to me for more formal coaching.  She pointed out very quickly that he was already showing great promise as a lifter.  I was extremely flattered for the referral.   I would be remiss if I didn't mention that on that 2009 trip to the states, Emily Friedel would become Australia's first Master Of Sport in Long Cycle.  In 2010, she returned to the USA where she would become Australia's first Master of Sport in Biathlon.

At Emily's suggestion, Antoni and I started some mild correspondence. I started providing some video feedback and some training ideas to help him.   I immediately realized what Emily meant when she spoke about his potential.   He had few technical issues, and he demonstrated a natural ability to relax.  There really was no "ego" in his lifting which I must say is rare for a newer lifter.

Antoni decided to make the long haul across the Pacific to attend our WKC Coach Certification (and a bachelors party in Vegas, and a wedding or something not important or KB related haha).    His first stop on the trip was St. Louis, MO.  That's right.  He came to see his new "Coachy".  Antoni and I had a 4-5 hour evening training session in my garage to fulfill the prerequisite for the WKC Coach certification.  The next day, he and I had a long road trip to Atlanta to attend the course at Scott Shetler's gym. 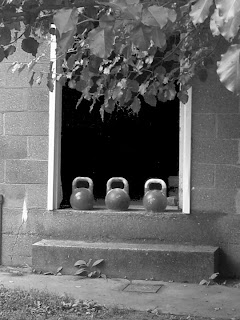 You might ask yourself how I could endure a 9 hour drive with a Spartan from Manly, Australia?  I don't know.  Maybe it was the fact that he had a picture of a guy wearing a Borat Mankini in his facebook photos?   Maybe it was the fact that Antoni has killer taste in music, i.e. Tool.  Maybe it was kettlebells?  I am guessing it was a fateful combination of all of those things.  I realized on that trip that not only was I a coach with a very promising new student, but I had made a life-long friend.

That has been 3 years ago.   Since that time, Antoni has continued to progress as a lifter and a very good coach in his own right.  Yes, like many of us he has had ups and downs in training.   But, he has never stopped lifting and trying to better himself in this masochistic endeavor we call Kettlebell Sport.

Last weekend, Antoni became the first man in Australia to hit Master of Sport at an IKSFA meet.   In addition to that, he set an Australian record in the Jerk by doing 93 reps with 2-32kg KBs.  I've had some very memorable moments in this sport as a coach and lifter, and this definitely rates as one of the best.  It is a prime display of coaching lineage.  It all started with Valery Fedorenko! 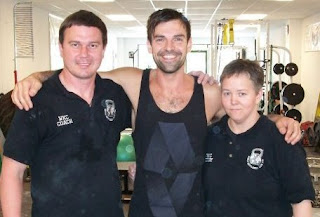 Congratulations Antoni.  I am very proud and grateful that you and I have stuck together over the last few years.  I know that your Master of Sports achievement is just a preview of of many more great things to come!  Remember what I said, nothing can stop a man in his shiny red shoes! 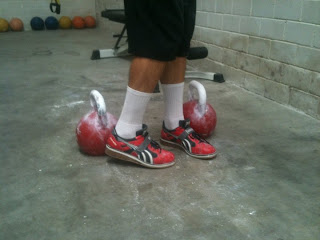 I will be teaching the WKC Fitness Trainers course in St. Louis, MO on October 20th from 12-6pm.

After a good deal of traveling in 2010 and 2011, I plan on doing less traveling for teaching in 2012. I will be doing some local courses in St. Louis later this spring and summer, and will advertise those here as the dates become available.

I will be in Manila (Philippines) on August 18th, 2012 teaching the WKC Fitness License Course. To register for that course or any WKC Camp or courses, please visit the WKC Store.

I've been slow in getting out our Schedule, but here is what we have on the books for 2011.

Valery Fedorenko and I will be in Asia at the end of May!

June 25th - WKC Fitness Trainer Course in St. Louis (This date is Tentative because we're not sure if the location will be ready yet)

If you are interested in registering for these courses or have questions regarding the courses, please contact me at cimes01(at)gmail.com or vist the WKC Store. Remember, in order to take the WKC S&C Course or the WKC Sport Coach Certification, you must already be a licensed WKC Fitness Trainer.

A few more dates and locations are likely to be added soon. If you are interested in hosting a WKC Fitness Trainer Certification or other WKC Certs, please contact me at cimes01(at)gmail.com .

I've had more discussions with folks on this topic recently, so it seemed appropriate for me to once again address this subject with my opinions ;)

Since 2008, I've been teaching alongside Valery Fedorenko at our World Kettlebell Club Coaches Certification and taught quite a few one day World Kettlebell Club Fitness Trainer Certifications. We routinely get asked the following types of questions? Where do squats, deadlifts, and presses fit into the mix? Should we do supplemental grip work, i.e. Grippers for snatches.

Lots has happened since 2008, but not much has changed in regards to the view on this topic. One related topic of discussion is why women typically do better than men even though women are working heavier now than they were in 2008. One of the reasons is that the lifts with 2 bells are harder. It's true; they are. I worked through a cycle of them in 2008 and worked my way to 10 min and near 70 reps with 20s and did 7 min with the 24s. It was a great challenge, and I did it so I could use it as an excuse for not bettering my snatch haha. However, I think this difference or difficulty has been somewhat blown out of proportion when trying to explain the success of the men in this country vs. the women. Let's face it, all of the men I have coached save one can exceed the Jerk numbers they need for their desired rank. The snatch is always the limiting factor and that's pretty typical with women as well.

What you mean you don't need no presses?

Have you ever seen the Ice Chamber women like Master of Sport, Sara Nelson do Jerks? Folks, I got news for you, her fixation is as good as any I've seen. She's powerful. I judged her set when she achieved the 28kg Strongsport rank in Long Cycle weighing less than 60kg. She has hit WKC MSWC long cycle numbers in training with a 24kg. Master of Sport, Emily Friedel has exceeded MSWC Snatch numbers with 75/75 in late 2010 and has hit or exceeded the required number of jerks as well. Without much 24kg training, she attained CMS IUKL Snatch rank with the 24kg recently. Neither Sara nor Emily do presses. I know for fact that Sara would not be able to press a 20kg, yet she has jerked a 36kg. These women are not the exception. There are other great examples in the USA and abroad.

Women pick up on jerks and to some degree snatches more quickly than men because they don't have the strength baggage (baggage meaning flexibility issues from benching or other grinds and reliance on strength to do the lifts). This seems to also be true of Girls and Boys. They are forced to adapt and learn the techniques or it simply won't work for them. Of course, I was the exception to this rule.

A message for the already bad ass strong folks.....

When I started the sport in 2004, I was relatively strong. I've been lifting weights for 26 years and up until 2004, my training consisted of mainly powerlifting type exercises and sets. By 2005-2006, I could press the 32kg for 4-5 reps per hand, and remember doing double 28s for 5 reps and pressing a pair of 24s was nothing for me. I was ok with snatching. But, I had a very difficult time learning the jerk. By 2007, I decided that I had to stop pressing. It was interfering with my ability to develop the speed and power that I would need for the Jerk.

That journey definitely gave me the ability to empathize with men who have a hard time learning the jerk (most specifically developing the first bump and flexibility). Moreover, it clarified the role of strength and training for this sport.

As I said in 2008, your strength will serve you well initially. If you came from a strength background, the bells don't feel heavy and that does help in terms of making it less overwhelming. Still, the issue is that many don't develop the qualities that they need to be better lifters whether that be speed, power, endurance or flexibility.

Would I ever say that squats, pressing or deadlifts have no value? Absolutely not. However, if your goal is to become a better Kettlebell Lifter and achieve a significant rank, then you have to ask yourself whether or not you really need these things to achieve your goals, especially in the beginning when you have yet to develop technical proficiency with the lifts.

Let's face it, some folks really don't want to give up their strength training regimens. They like lifting heavy shit. So, for those individuals, it may take them longer to achieve a significant rank, or it may never happen. It's all about priorities.

If you are at your wits end in terms of improving your numbers, and you are sure your technique is just fabulous, your program is the best on the planet and not your limiting factor, then taking a break from the lifts for a few months and focusing on strength work may be worthwhile. However, if technical improvements seem very hard to achieve and you are doing heavy pressing or deadlifting, you may want to rethink your strategy.

I procrastinated for a while on this article, but finally completed it recently. It's hopefully a good and concise explanation of our views on speed, stability, tension, relaxation and how those attributes are coordinated with breathing.

We've added several new courses for the fall. The dates for Australia will be advertised soon. But, we are targeting mid-Feb 2011.

There will likely be a few more added. If you are interested in attending any WKC Coaches Certification course or the Fitness Trainers Certification, please contact me.

Fitness Trainer and WKC Coaches Certification.
Posted by CI at 1:08 PM No comments:

CI
I'm currently working in IT. Have a strong interest in Kettlebell Lifting/Teaching.